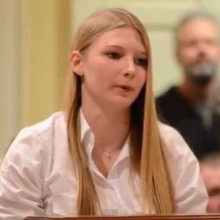 In another video provided by The Maryland Minutemen, a fifteen year old young woman addresses the Maryland state legislature and in doing so some of the most hardcore gun control politicians. While some girls are running around attempting to be the next Lady Gaga, Madonna or Beyonce, it’s nice to know there are young women with some priorities in their lives. This young lady gets it, at least where arms are concerned. Take a look as see what you think.

Though I have attempted to discover the name of the young woman that spoke, I have yet to do so. However, she is a very well-spoken young woman and carried herself with poise and ease before the legislature.

She has been shooting for almost eight years. This indicates that her parents began teaching her at an early age. She has been a part of the Maryland Rifle Club and Maryland State Rifle Team since she was eleven. To the horror of the bun grabbers, she declared, “We shoot semi-automatic AR-15s and my personal rifle is a Bushmaster.”

Because of her experience, she has become so proficient that she has become eligible for various shooting scholarships from around the nation “from a wide array of even the most prestigious college shooting teams.”

“Stricter gun control laws would have obliterated any opportunity I would have had could have had to attend a decent college on a shooting scholarship,” she said.

She also declared that ever since she began to learn to shoot, the issue was clear in regards to gun violence, “Guns aren’t the problem; people are.”

In addressing the legislature concerning their gun grabbing legislation, she said, “By signing this legislation, you are not signing away gun violence, but instead liberating American citizens of our constitutional rights. You are not eliminating guns from society, but eliminating our ability to protect our lives, liberty and pursuits of happiness.”

The young woman then went on to point out the dismal record of Barack Obama’s city of Chicago, Illinois, a city with arguably some of the toughest gun laws in the country. “It is twice as likely for you to be killed in Chicago as it is to be killed in the Afghani War,” she stated. She then backed up her bold statement. “For the past eleven year and four months, in the Afghani War, 2,166 people have been killed (obviously referencing American people). Now in only eight years in Chicago 4,265 people have been killed and 3,371 of them were from being shot.”

“Is that really something we want to model our state laws after?” she asked rhetorically.

She went on to drive the point home that of the 3,371 that were killed in Chicago, only 37 of them were killed with a rifle. That’s barely 1%! Since 98% were killed with a handgun, the young lady says that “gun control legislation that targets assault rifles (Yes, I know, it’s semi-automatic rifles and so does she, but she’s rubbing their noses in it) has statistically proven to weed out only less than 1% of the problem if you’re lucky.”

She also pointed out that none of the firearms used in the Chicago shootings were either licensed or registered to the people who used them. This statistic alone should be enough to argue against background checks of any king or any type of registration or permit. After all, you don’t have to have any of those things to exercise any of your other rights, so why is that imposed on the Second Amendment? (Hint for liberals: It’s to control you.)

She then recounted the fact that restricting guns will not stop criminals from hurting people and pointed out that the same day of the Sandy Hook shooting that a knife wielding man injured 22 children and one adult outside a primary school in China.

“Guns are not needed for mass murder and robbing American citizens of our rights to own them won’t solve anything,” she said. “You must also consider the fact that the majority of gun violence occurs in low income neighborhoods. Raising the overall costs of owning a gun through higher licensing and registration fees denies the ability of low income individuals to protect themselves from the crime focused in the areas they live in.”

She then points out that passing legislation such as the Maryland legislature was considering was discrimination against the low income citizens, who are actually at the higher risk of becoming victims of crimes.

Concluding her remarks, she summarized what Maryland’s legislature and its governor were seeking to do.

It is the Second Amendment that was put in place to make sure that the government understood that men keeping and bearing arms is not at the granting or the benevolence of government. Government is simply to protect that ability from infringement, even when it is the one seeking to infringe. In fact, I would say that any American is not only acting irresponsibly in not owning a firearm, but they are neglecting their duty to their families and country (their individual state) by not owning a firearm. Bravo to this young lady for speaking the truth and doing so very precisely and poignantly!