Death of the Old Media… 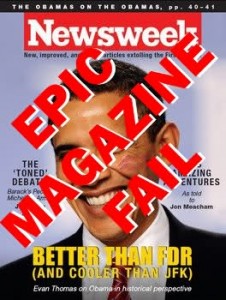 Today we hear that Newsweek Magazine will now go digital only. Any body wondering why? Well let me clue you in from my perspective. It turned into a liberal Rag soon to be followed by Time Magazine. For those of you who are rolling your eyes at the last comment, hear me out. Last week we had the horrific shooting in Aurora Colorado. What was hot on the list of Main Street Media? Find out if the Killer was with the Tea Party. Enter Ass clown Brian Ross and aided and abetted by George Stephanopoulos. Their game was to trot out a Jim Holmes who was a registered Tea Party Patriot member listed in Aurora Colorado. The inference here was, See, the Tea Party Members are a bunch of Anti Government Whack Jobs. Never mind that this completely blew up in their faces and they looked like the idiots they really are, what was telling, and what brings me to this missive is, the public is rejecting the Main Stream Media and their Agenda Driven Slanted News.

Still don’t believe me. turn on CNBC at 8:00am on any Thursday just before they announce the weekly employment report. As has been the case in 22 out of the last 25 weeks, the government announces a number that is consistently raised the following week. Does the Media ever mention this? No, not at all because it would not fit the narrative they want put across to the public that the economy is on the mend and things are getting better. Let me stop here and make a comment. Do I want things to get better? Absolutely I do. However, what I don’t like, is the constant cheer leading for the government or advertisers, that then is proven to be false shortly there after. When that happens, you have NO Credibility in my book. Furthermore, these media institutions should be avidly seeking out and reporting the truth rather than obfuscating it and being part of the news.

Still don’t believe me, recently CNN (Clinton News Network) was trying to explain the lowest ratings in 20 years, how about this, Stephanopoulos, ABC Sink to New Lows on ‘This Week’ – Yahoo … this was from the week of June 10 2012. No doubt after the latest fiasco with Brian Ross, maybe Stephanopoulos,  who is really a political Hack for the democrats and former Clinton administration, will have to get a real job. So you see there is a reason Newsweek is going digital and one foot closer to the casket. These moron can’t figure out that the game is up for them. Their pretense of objectivity has been shot all to hell by shilling for every liberal cause trotted out by either the administration or liberal talking points disseminated by the Democratic party. Let me also mention, the Republican Party is no better when it comes to talking points. I am a conservative first and will call BS no matter what side of the aisle.

Now….there may be some of you out there in la la land who are sitting back and thinking , Well… the reason news print readership is declining is because of the internet, and to a certain degree, I will agree with you, but how do you explain the lack of viewers for Liberal Television and Cable? You can’t …People are smarter than you think, and the more partisan these programs become the more viewers and readers they are going to bleed...For Newsweek….Dig the hole, they are done…

UPDATE: Here are couple of late breaking reports which bolster the case I made above further. This morning, on MSNBC’s Morning Joe, NBC political director Chuck Todd admitted their poll had a skewed sample (around 3:50 mark) and stated that, if this poll were weighted similarly to their last poll, the race would have been unchanged, instead of Obama extending his lead over Romney to 6 points. (Of course, this invites the question as to why they didn’t use the same weighting in this sample.) Apparently MSNBC got caught doctoring a poll as they were trying to shill for the President. The second item is from ABC. They want it known that ABC News President Ben, “Deputy Dog” Sherwood is now on the job and that the lies told during their Prime Time Broadcast Detracts from other wise excellent coverage….Hey Benny Boy….You DOPES became the News you Moron….

So there it is, All exposed for everyone to see and they can’t figure out Why they have a credibility problem and are Bleeding Viewers.