Home / Jerk of the Week / Eric Holder and the “Fall Guy”

Eric Holder and the “Fall Guy” 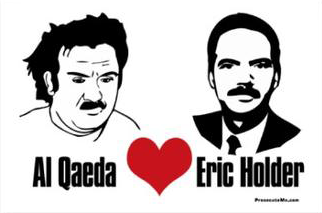 I’m not a huge conspiracy theorist, but doesn’t this whole Fast and Furious thing reek like an Episode of “24”? It’s a little different than “24” though I’m afraid, because this guy seems like he is 100% above the law. Even if he is not guilty (unlikely), he should still be fired for not knowing about it.

Let’s start at the beginning. Circa 2009 the government starts allowing guns to be “walked” across the border for a reason they say like this: “The idea was that you would follow it long enough until you were sure you had enough probable cause to initiate an arrest”. So in other words, you put guns in the hands of criminals and then wait for them to use them before you decide to arrest them. This is by far one of the stupidest things I have ever heard. It’s like giving a junkie a bucket of cocaine and then waiting for him to use it all before you arrest him.

Anyway, back to the topic at hand. My problem comes from this – either he is incompetent for not knowing about it or he is complicit with it. Either way, the man should be evicted from office on either account or both accounts. The same is true with President.

Another theory I- and not only me – have (and this one may not be so whacked out) is the entire reason for this “Operation” was a botched attempt for more gun control. CBS supposedly obtained some evidence about this, but have you ever heard of it? Probably not, I’m sure a lot was done to keep this “shut up”.

Just like Mr. Holder is shutting up. I think the reason why these idiots have not been brought to justice is a few reasons – One: Obama’s Executive Privilege. We know there must be something in there that is incriminating. Two: That the reason why Mr. Holder was “cleared” (for now) is because of what is in those documents. Three: Once those documents get released (and I bet the Pres will do anything to keep those shut up until the election), there will be a lot more fallout and outrage and because of that, Mr. Obama’s “poll numbers” will drop big time. I personally think that nothing else matters to this guy other than being reelected. The same is true about Eric Holder.

He will do anything, say anything, make anyone fall him to keep his job.

So in my opinion and based on the facts I have read, they had to find a fall guy. Or some fall guys. End of story.