Home / Economy / Food Stamp Use Climbs to a Record 46.7 Million

Food Stamp Use Climbs to a Record 46.7 Million 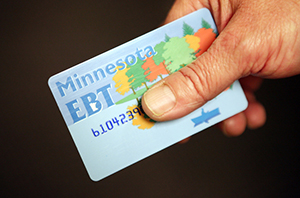 Let me start off by saying this – I have no problem helping someone who is down on their luck. Someone who has tried very hard to keep themselves sufficient and still somehow can’t keep it that way. Someone who is actively looking for a job, but just can’t find one – whether it be due to their skill set being in low demand, the job market or economy being a little slow, or for other legitimate reasons.
What I do have a problem with is government dependence and the people who just aren’t trying (or who claim they are trying but who are really just sitting at home, who have given up searching for a job, or who have suddenly come down with some sort of disability). Even worse, you hear about people who are on EBT cards, yet still have the “neccesities of life”, like a smart phone and data plan, DirectTV, a new flat screen to watch TV on, and maybe they are even getting pregnant or getting someone pregnant. They may have a car or a truck, they drink Mountain Dew or Coke, or maybe even own two homes. Priorities anyone?

Every where I look around the city I see signs about accepting EBT cards. Here is my problem with this whole situation, and it comes to light out of a proverb: “Give a man a fish and he will eat for a day, teach a man to fish, and he will eat for the rest of his life”. There is a culture of dependence in this country that is obviously getting far worse. People are far too comfortable with the “Shut up and just give me a fish”, because the truth is that it is probably easier to do that than to learn a skill. Everyone wants something for nothing.

When our ancestors came to this country, did they come here with the idea that they would get here and government would take care of them? I believe not, I believe they came here with the idea that this place, out of all others, had more opportunity for them. And that includes the opportunity to succeed and the opportunity to fail. No matter what, if you are black, white, pink, purple, red, yellow, it’s all the same. We all have the freedom to succeed and the freedom to fail.

So what do we do to fix this culture of dependence?  Get rid of the “incentives” to stay out of work – is exactly how I think it should work. If you were getting 700$ per week in unemployment + food stamps, and you found job that only paid you 600$ per week, what would you do? Most people, I assure you, would rather sit around at home and collect, collect, collect.

As I’m sure you’ve heard, roughly 50% of the country does not pay any taxes. That’s 1 / 2. One out of every two people you see on the street pays no income tax and yet the government sees sufficient cause to send out a “cash reward” to these people and to the people who can’t seem to stay away from the illegitimate pregnancy. If you agree and support welfare reforms, you are seen as “insensitive”, “racist”, and “cold-hearted”. You want to leave a new mother out in the cold with her child if you think we need entitlement reform.
I almost think the people who are on government assistance should be stripped of their right to vote – because their vote will always be cast at the person whose aim is to enhance their benefits. People who are dependent are so easy to control – look at drug addicts. If they don’t have their fix and if you can get them their fix, there is almost nothing they will not do. It’s the people who work who pay for the people who do not work. Seems like Russia (USSR) tried this same concept and it failed.