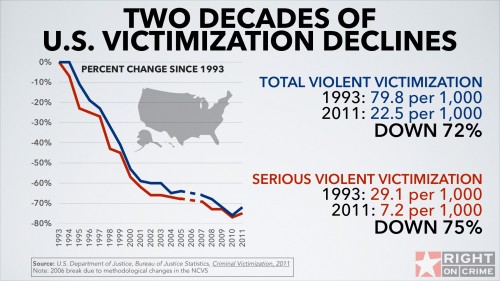 Recently, a study was published which pretty much refutes many of the lib talking points when it comes to Gun Violence. I have included the article for you to read, however, the fact of the matter is, Gun Violence has been decreasing since 1993, yet the public does not have that perception. I wonder why. Well….actually……. I do not wonder why. When you have a steady, negative drum beat coming from both the Main Street Media, our Gun Banning Commander in Chief, don’t be surprised if the public is not aware. When we refer to the public, there is a certain segment of the population which are comatose when it comes to knowing what is going on around them.

Okay so gun violence is down, Why? The simple answer is this, an armed society is a more polite and safer society. How so? Well… for the same reason gun crime has gone down in states that have enacted concealed carry laws. The knuckle dragging criminals may think twice before attacking, as the thought just may run through their head, that the person they are about to attack, may be armed. You see most criminals are not banking on getting hurt in the process of robbing / raping you, hence, they may look for an easier mark. Once again , if you want to be a victim, act like one. So,…having said the above, do I expect anything to change? Not really,…as even this information was buried when it came out because it does not fit the narrative the media would like you believe. As we have seen over a long period of time, the media is being seen for what they really are, a bunch of mindless shills  for every liberal cause which includes banning guns and for the present administration…Go figure….

WASHINGTON — Gun homicides have dropped steeply in the United States since their 1993 peak, a pair of reports released Tuesday showed, adding fuel to Congress’ battle over whether to tighten restrictions on firearms.

A study released Tuesday by the government’s Bureau of Justice Statistics found that gun-related homicides dropped from 18,253 in 1993 to 11,101 in 2011. That’s a 39 percent reduction.

Another report by the private Pew Research Center found a similar decline by looking at the rate of gun homicides, which compares the number of killings to the size of the country’s growing population. It found that the number of gun homicides per 100,000 people fell from 7 in 1993 to 3.6 in 2010, a drop of 49 percent.

Both reports also found that non-fatal crimes involving guns were down by roughly 70 percent over that period. The Justice report said the number of such crimes diminished from 1.5 million in 1993 to 467,300 in 2011.

But perhaps because of the intense publicity generated by recent mass shootings such as the December massacre of 20 school children and six educators in Newtown, Conn., the public seems to have barely noticed the reductions in gun violence, the Pew study shows.

The data was released three weeks after the Senate rejected an effort by gun control supporters to broaden the requirement for federal background checks for more firearms purchases. Senate Democratic leaders have pledged to hold that vote again, perhaps by early summer, and gun control advocates have been raising public pressure on senators who voted “no” in hopes they will change their minds.

The Justice study said that in 2011, about 70 percent of all homicides were committed with firearms, mainly handguns.

The trend in firearm-related homicides is part of a broad nationwide decline in violent crime over past two decades, including incidents not involving firearms.

Though researchers differ over all the reasons why gun violence has declined, many attribute it to the aging of the baby boomers. The crime rate was higher in the 1960s and 1970s when many in that large generation were teenagers, an age when higher proportions of people commit crimes.