Home / News / Lastest Gun Control Scheme Goes Down In Flames but Vigilence is the Watch Word.

Lastest Gun Control Scheme Goes Down In Flames but Vigilence is the Watch Word. 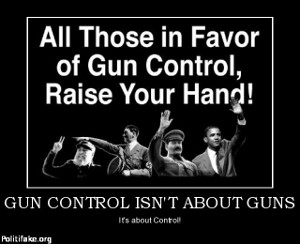 Late yesterday afternoon, we were treated to our Petulant President essentially calling those groups which support the 2nd Amendment a bunch of Liars after his latest gun control scheme failed to pass in the senate. Let me tell you, he should know, this guy would not know the truth if it were staring him in the face. The fact of the matter is, The clowns in the senate that offered this piece of garbage up, thought this was going to be a slam dunk, especially after the Newtown CT tragedy. Before I go any further let me say, the Newtown situation was terrible but let me tell you, we are one massacre away by some crack pot, from another all out assault  against our gun rights. If you think these guys are going away, you are in dream land . As I mentioned in an earlier column, this has nothing to do with Gun Control and everything to do with People Control.

While the last statement may be inflammatory, I really could care less. Our rights should not be predicated, or based upon, what some mad man does, but in this case, this tragedy was used to gin up the anti gun debate. Let me ask you this, when was the last time the President flew a number of private citizens in Air force one? Can’t think of one? Neither can I, nevertheless, the President used these families from the Newtown Killings as props over the course of the last week to gin up support for his so called “common sense” gun control. Never mind that none of the proposals would have done anything to prevent the killings in CT. When a Mad Man is willing to kill his own mother and steal her firearms, do you really think your going to stop him especially if he’s willing to die in the process with more Gun laws?

In my opinion we have all the gun laws we need at this point. Just look at Chicago, which is now at the top of the leader board when it comes to murders in the USA. Chicago has some of the most restrictive gun control laws in the nation and you want to know what?   ……It doesn’t matter one bit because the criminals don’t seem to be bothered by any of these laws, they could care less. When the government is asked why they don’t enforce the current gun laws on the books, they are curiously silent because once again, they are not interested in Gun Control Per SE, they are interested in People Control. People with firearms are a threat to them. Why are they a threat to them?  I will tell you why. They do not like the fact that you are self reliant. You need the government to take care of you.

In a column I wrote some time ago, I mentioned a Sheriff in Milwaukee who told the public that due to budget constraints in their department, that they did not have to the man power to be everywhere all the time. He further mentioned that it was a good idea for citizens to get a gun along with training in its use. The fire storm that this generated against this Sheriff was off the hook. How dare this guy make such a statement. Didn’t you know Komrade …….that the state is always right????? What is this nonsense of people defending themselves? I think you get the idea. As I have stated many times, the biggest threat to government is the person who thinks for themselves.

Okay, ….so we beat this one back and the reason this was beat back was the politicians heard from you!!!! That’s right, they heard from the public and the public made it very clear that more gun control was not in the cards. How do I know this? Let me give you an example from my home state of the Peoples Republic of Minnesota. After the Newtown Tragedy, there were a number of states that wanted to ram through what they considered commonsense gun laws. What passed for common sense gun laws in Minnesota was going to be a wholesale ban on semi automatic rifles and very restrictive magazine bans, none of which would have prevented the Newton killings. You see they always say this is common sense gun control but their actions belie their words. The first day of hearings at the capital, the supporters of the 2nd Amendment were out in force, There were crowds of us. No doubt this was not lost on the politicians. If there is one thing a politician wants is, to get re-elected. The message to these clowns in the Minnesota Senate was, you vote for this, you may not get re-elected. This is exactly what happened on the national level. People do not believe Chuck Schumer when he says he wants common sense gun control.

So while we may have won one today, let me be clear on this next point, If you value the right of Self Defense. If you value the second amendment, we must be vigilant. As I mentioned earlier, we are one massacre away from another all out assault on our rights. The next time they are going to try and ram a New York down our throats. The new York template is to pass a bill with no debate in the middle of the night. We can not let this happen. We need our politicians to know in no uncertain terms, you vote for more gun control, and your out of here. Does this sound militant? Yes, you are dammed right it does because guess what? The other side is playing for keeps and we will not go ” Silently into the night”. The take away from this is, don’t give up and make sure your local and national politicians hear from you on an on going basis.

One person can make a difference, and that person is you, right here, right now….believe it.

Lest any of you think the battle is over, the quotes from some of our stalwart politicians should disabuse you of their real intentions.

“It’s a matter of time,” Pelosi said Thursday during a press briefing in the Capitol. “It might be inconceivable to the NRA that this might happen; it’s inevitable to us.

Related Items
← Previous Story Bomb Rocks Boston Marathon
Next Story → Guest Post: To The Left On The 2nd Amendment: Give Up