Home / News / Sequestration…Politics at it Finest… 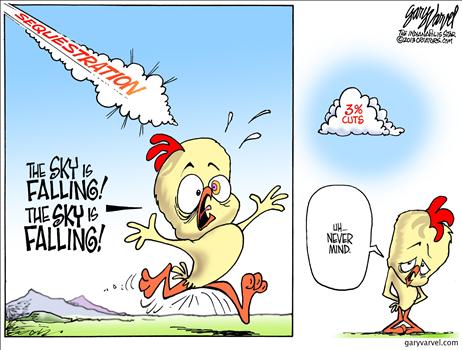 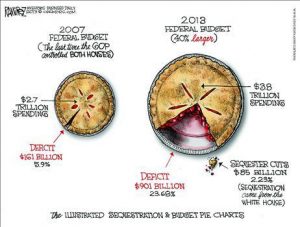 Maxine Waters was quoted as saying we would lose 170 Million Jobs in this country if the sequester kicked in. Lets see,….. 170 million???? I think that would probably be everyone working since the number of Americans in the work force is approx 153 million but hey….never let a lie get in the way of a goofy story, especially in their quest to amp up the down side to any budget cuts. You see the reason we are at this juncture is, nobody wants to cut anything. This is the crux of the whole deal, we can’t cut spending on anything. That’s right, absolutely Nothing !!!!

As a matter of fact, if anything, they want to spend even more money. Recently, we had our esteemed Fed Chairman Bernanke, testify at congressional hearings on the state of the economy. Whether you know it or not, we have QE3 going full tilt. QE-3 is the government printing 85 billion dollars a month out of thin air. All this in the hope, that it somehow, is going to kick start the economy. Now let me tell you. We had QE-1, we had QE-2 and they did nothing to turn this around. So,…. in the governments world, when something does not work , we do more of the same. Milton Friedman once said, “If you put the federal government in charge of the Sahara Desert, in 5 years there’d be a shortage of sand.”

Okay,….. so here we are, March 1st. The sun came up in the east and will set in the west and we will continue to spend money we do not have. We will cut nothing and we will continue to print 85 billion dollars out of thin air on a monthly basis. If you think this will end well, let me tell you, it won’t. At some point we are going to hit the wall. I don’t know when that is, but I do know, the laws of sound finance have not been repealed just because we think we are special, or, entitled to spend more than we take in.